1351 – The plague known as the ‘Black Death’ swept across Europe from 1348 to 1351, killing about one third of the population, resulting in a loss of labour needed to farm the land, and work on Walsham’s incomplete church; original plans were altered, and beautiful, flowing, decorated window tracery had to give way to plain, simple intersected tracery. With the economy of the country in turmoil The Statute of Labourers stopped the peasants taking advantage of the shortage of workers and demanding more money. Peasants were forced to work for the same wages as before, and landowners could insist on labour services being performed. This meant that the landowners could profit from shortages, whilst life was made very much harder for the peasants.

Extra revenue was also generated by the imposition of a Poll Tax on the people. The arable fields were laid to pasture, and common land was enclosed for sheep farming. This was less labour intensive with more profit being made from wool production.

1377 – Even some thirty years later, life had not returned to normal and discontent was widespread amongst the poor. Prices had risen a lot since the Black Death. Wages had not risen as fast, so the peasants suffered from hunger and shortages.

King Edward III died and his ten year old son became King Richard II with his uncle John of Gaunt advising and controlling him. England had been at war with France for almost a hundred years which had cost a lot and the King had little money left. John of Gaunt imposed a new tax on everyone in the country known as the ‘Poll Tax’. Up until now taxes had only been on rich people and so the peasants were not happy to be included. This was set at 4 pennies for every person over 14 years. This was about one week’s wages

1380 – the Poll Tax was raised to 12 pennies for every person or about 2½ weeks wages. This would be collected in 1381, 8 pennies in January and 4 in June. Many people hid when the tax collectors came to their village to avoid payment. When John of Gaunt realised that people had avoided taxes in January he sent out collectors in June with instructions to find everyone and collect all of the taxes.

30th May 1381 – One of the collectors was Thomas Bampton. When he went to the village of Fobbing in Essex he told people that they would have to pay the tax of those who were hiding. Not surprisingly, a riot followed, and Bampton and his men were beaten and driven from the village. News of this quickly spread to other villages in Essex, Hertfordshire, Suffolk and Kent and peasants turned on the lords who owned land and burned tax records. Some unpopular landowners were killed, others fled and others captured and humiliated.

7th June 1381 – In Kent, Wat Tyler became the leader of the revolting peasants. They marched to Canterbury and captured the castle and the Archbishop’s Palace.

11th June 1381 – The Essex and Kent rebels marched towards London. They believed that the King had been badly advised by his uncle and wanted to meet him to explain their grievances.

12th June 1381 – The rebels from Kent arrive at Blackheath on the outskirts of London. Soon afterwards the Essex rebels arrive at Mile End. Peasants also begin arriving in London from Surrey, Sussex, Suffolk, Norfolk, Cambridgeshire, Buckinghamshire and Hertfordshire. It is estimated that there were about 30,000 people in Wat Tyler’s army. A message was sent to the King, demanding a meeting. It was arranged that he would meet them at Rotherhithe, on the Thames, that afternoon. The King is worried by the rebels and sends messages to all his lords and bishops to keep a close eye on what was happening in their own areas

13th June 1381 – Richard travelled downriver in the royal barge, but at the sight of the huge crowd of peasants, Richard’s advisers would not let him land. He returned to the Tower of London, leaving the peasants angry and frustrated. That night they entered the city and whilst most were well behaved some were not and riots took place and some residents were killed.

14th June 1381 – King Richard accompanied by his army of just 520 men, agrees to meet Wat Tyler and the rebels at 8.00 a.m. outside the town walls at Mile End. At the meeting Wat Tyler explains to the king the demands of the rebels. This includes the end of all feudal services, the freedom to buy and sell all goods, and a free pardon for all offences committed during the rebellion. The King agreed with all of their demands.

15th June 1381 – The Mayor of London gathered an army of 5,000 and with the King again met Wat Tyler and the rebels, at Smithfield. The Mayor argued with Wat and stabbed and killed him. The rebels obeyed the King’s command to leave when he repeated that their demands would be met.

The Peasants’ revolt in Norfolk

12th June 1381 – here in Norfolk John of Gaunt owned a large house at Gimmingham and this was attacked and destroyed by rebels led by John Litester a cloth dyer from Felmingham.

13th June 1381 – The rebels went to Norwich and on 17th to Yarmouth, releasing prisoners from jails. John Litester, assisted by amongst others a man called Cubitt of North Walsham, led a rebellion of many thousands who seized the city of Norwich, killing the mayor in the process. Three of John Litester’s followers, Trunch, Skeet and Cubitt were sent to London with two local lords they had taken hostage.

18th June 1381 – Henry de Spenser the Bishop of Norwich left his home at Oakham to return to Norwich to protect the King’s interests in the city, although he did not yet know about the rebels there.

20th June 1381 – en route Bishop de Spencer met Trunch, Skeet and Cubitt and their hostages at Icklingham near Newmarket. He understood that a rebellion had started and he executed the three rebels on the spot.

21st June 1381 – John Litester held a conference at Felmingham and called on everyone who supported the Kingdom and the people of Norfolk to follow him to North Walsham to defend Norfolk against the tyranny of the Bishop of Norwich and his soldiers.

The battle of North Walsham 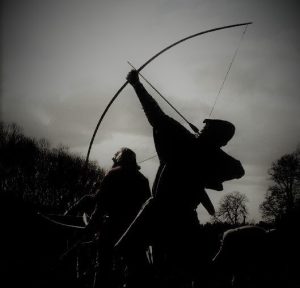 26th June 1381 – John’s force moved across the heathland from Felmingham to Bryant’s Heath on the Norwich road near to where the toll houses are now. They dug a ditch around their camp and made barricades using whatever they could find, including their carts and also doors, tables and other furniture taken from local houses.

As the Bishop arrived he could see that there were many rebels but that they were not well organised and certainly less well armed than his own experienced soldiers. The Bishop was known as the warrior bishop from his time with the army in France and he galloped at the rebels carrying a spear and shouting at them to surrender.

Despite initial defiance, the rebels were overcome by the soldiers and it is said that many hundreds were slain and the defeated peasants fled towards to the town, seeking refuge in the incomplete church. Legend says that the Bishop’s men burned the church down with the peasants inside, but there is no contemporary record to confirm that.

John Litester hid in a cornfield but was seen and captured by soldiers. He was tried by the Bishop and found guilty of treason against the King. He was executed in Norwich castle and cut into four, each piece being publicly displayed in Norwich, Kings Lynn, Great Yarmouth and Thetford as a grisly warning to others not to rebel.

Three stone crosses were soon erected marking the site of the battlefield, as a permanent reminder of the consequences of such uprisings.

Crosses were erected at the three corners of the battle site. The one at Toll Barn beside the Norwich Road is the only one still standing, the others were beside the water tower where a stump remains and in the woods the the west of the road